Parousia Media is the official distributor of RISE in Australia and New Zealand. All orders for RISE should be placed on this site.

RISE™ is a collaboration of individuals and organizations that believe it's time to cast a wide net to awaken today's man. Our goal is simple: to use powerful media as a tool to present the true path to freedom and peace by challenging men to live the fullness of their vocation every day; at home, at work, and in their communities. We are not teaching theology, and this is not another boxed program. We are giving men a battle plan for daily living, and walking alongside them each day. When men understand their profound dignity as sons of God, and are re-oriented towards what really matters, the impact on themselves and those around them will be significant.

Men are encouraged to walk with a brother (friend/relative) through the 30-day challenge. In forming these relationships around a common battle, men will hold each other to a higher standard, and true Christian brotherhood will be born.

RISE is for every man, whether they're just seeking, or have been well-formed, because it takes them deep into their own hearts, and challenges them to make what they've learned practical. The results are nothing but life-changing. 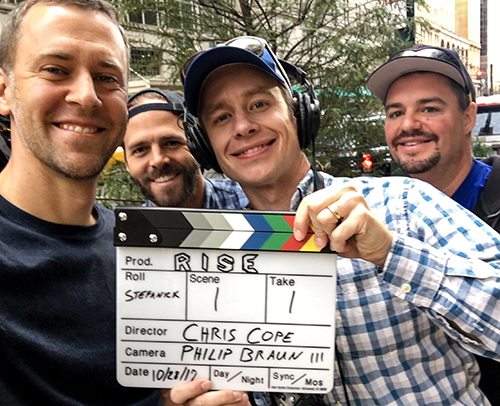 Chris Stefanick is a father of six and an international speaker and author, including host of EWTN's Real Life Catholic. He worked under Archbishop Charles J. Chaput in Denver, and is the founder of Real Life Catholic, a nonprofit dedicated to reengaging a generation through powerful media, live events, and resources. Chris is the co-author and video presenter for RISE.

Bill Donaghy is the father of four and a curriculum specialist at the Theology of the Body Institute. He has spent his career in diocesan, parish, and ministry work, as well private high-school education. He holds a Masters in Systematic Theology from St. Charles Borromeo Seminary. Bill is the co-author of RISE.

Chris Cope is the Owner and Creative Director at Cardinal Studios LLC. He is a father of four and spent over 12 years as director of marketing and then creative director at Ascension Press, where he co-produced and directed Chosen, Altaration, I Will Follow, and other faith formation resources. In 2016 he founded Cardinal Studios to focus on partnering with ministries and organizations to develop powerful media and evangelization resources. Chris is the Director and Executive Producer of RISE.

Philip Braun III is the owner of Philip Braun Productions LLC, and has worked in the film industry for nearly 15 years. He recently directed the short documentary, I Lived on Parker Avenue, and served as director of photography for Real Life Catholic on EWTN. He also served as DP on programs such as Chosen, Altaration, I Will Follow and various other faith formation resources. Philip is the Director of Photography for RISE.

Sean Schiavolin and Dave Kang are the writers, producers, and directors of Ecce! Films.

Sean is a father of 4. Dave is a father of 2. The have spent over a decade producing compelling, groundbreaking media, and are known for their work on the Humanum Series for the Vatican, and the Economics of Sex. They are crafting stories, writing, and editing as producing partners for the RISE program.

Mike Fontecchio is a father of six and the owner of Faith & Family Publications. Mike has spent over 20 years in Catholic media, with 13 years at Ascension Press, most recently as Director of Production. He has vast experience on the logistical side of production, and is overseeing the operational management for RISE.

Parousia Media strives to bring the message of faith and formation to Catholics and individuals across Australia, New Zealand and beyond.  We provide media outlets, bookstores, schools, universities, teachers, catechists and individuals with quality Catholic resources in CD, MP3, DVD and Book formats. For the last 10 years, we have coordinated 30 national and international tours and over one hundred local events, importing international speakers and prominent figures to address audiences of all ages, creeds and cultures. Our mission is to inspire all Catholics in Australia and beyond, to embrace the Gospel message and transform society. Over 200 000 people have been evangelised through this work with over 200 000 resources being distributed.

We believe in bringing Catholic organisations and ministries together, uniting us all with a common vision and a common voice of charity in the Truth as we prepare for the glorious 'parousia' (second coming or presence) of our Lord and Savior, Jesus Christ. You can find material from the world's best presenters on the Catholic Faith like Dr Scott Hahn, Chris Stefanick, Bill Donaghy, Jason Evert, Bishop Robert Baron, Tim Staples, Archbishop Fulton J. Sheen, Deacon Harold Burke Sivers, Leah Darrow and many others. Topics include marriage and family, Chastity and Dating, Scripture, Church History, Catechism Products, Marian material, Apologetics, Conversion Testimonies and many others. There will be something for you no matter where you are situated on your personal journey.